A kid story. The story of Les Jouets Libres began in a child's bedroom where a 5 years old boy asked his dad: "Dad, can we build a marble track ?"..."And dad, I would like heroes too, huh?". An adventure has just started. Thus, from their first range of toys RouleTaBille was born the publishing company of children's toys "Les Jouets Libres" with the will of developing modern, sustainable and ecological toys made in France where the child is involved in the game and can develop his/her imagination and creativity. Stronger experience. As they consider that the child's development occurs through intelligent toys, they would like to involve children in their societal approach: for example, they develop partnerships around forest issues to explain that for making a wooden toy, there is a whole ecosystem to preserve... A concept is born. RouleTaBille was launched at the end of October 2012 and received a rousing welcome from toy industry. So they decided to speed up their development with a new collection about "the revisited great classics". 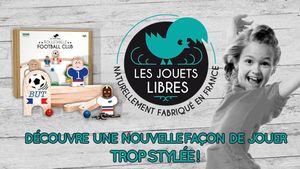